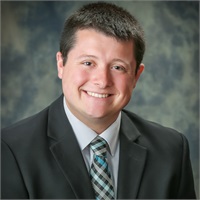 Robert joined Klamath Insurance Center, an LCN Network Office, in June of 2018 after spending the previous 5 years working in the non-profit and government sectors. Most notably, Robert was the Executive Director of Basin United Soccer Club & Mike’s Fieldhouse in Klamath Falls. Robert also served as the Local Public Safety Coordinating Council Coordinator in Klamath and Lake Counties for the Association of Oregon Counties.

Robert is a home-grown boy who was born and raised in Pendleton, Oregon. In high school, Robert found his passion for business while working for Thompson RV, working his way up to running their Parts Department at only 16 years old. Robert also worked for the Auto Service Center at Pendleton Grain Growers and Baryhte Specialty Foods.

Robert graduated from Pendleton High School in 2011, then moved to Klamath Falls to attend the Oregon Institute of Technology. While studying at Oregon Tech, Robert found his home in the Business Management-Marketing department. While at Oregon Tech he completed several large projects and was the Student Assistant to the VP of Finance and Administration.

Since moving to Klamath Falls, Robert has become a strong supporter of his community. He volunteers most of his free-time as a Reserve Police Officer with the Klamath Falls Police Department as a Level I Reserve Officer, which means he patrols solo and provides the same services and takes the same risks as a full-time Officer; however, he does it without a paycheck. Robert currently serves on the Board of Directors for the Friends of the Children – Klamath Basin, as well as Basin United Soccer Club. He is also a member of the 3rd Thursday Event Planning Committee for the Klamath Falls Downtown Association.

In 2020, Robert was awarded his Financial Paraplanner Qualified Professional designation from the College of Financial Planning. Individuals who hold the FPQPTM designation have completed a course of study encompassing the financial planning process, the five disciplines of financial planning and general financial planning concepts, terminology and product categories. Additionally, individuals must pass an end-of-course examination that tests their ability to synthesize complex concepts and apply theoretical concepts to real-life situations. All designees have agreed to adhere to Standards of Professional Conduct and are subject to a disciplinary process. Designees renew their designation every two-years by completing 16 hours of continuing education, reaffirming adherence to the Standards of Professional Conduct and complying with self-disclosure requirements.

Robert is excited for this opportunity to transition back to the private-sector, and utilize his background and experience in a new way. Robert lives a life dedicated to the service of those around him and has shown he can translate that to his professional role. He is the person who celebrates success, when those around him are successful.